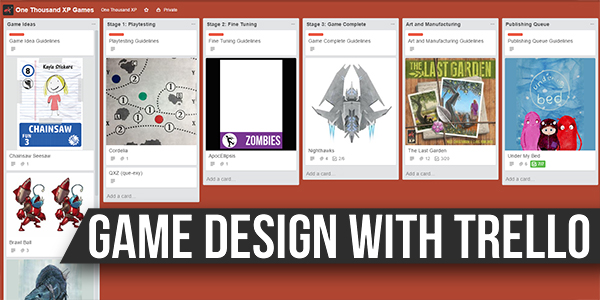 I recently made a YouTube video where I revealed my Top 3 Game Design tools. When I did, a bunch of folks reached out to me to ask how I set up my Trello page. So here we are!

One of the biggest hurdles I encountered when I was beginning to design games was that I had too many ideas! It turns out, that that sensation never goes away. I can recall an interview with Eric Lang where he explained that one of the ways that you knew you were a game designer is if you had more ideas than you had time. For me, this rang particularly true. As somebody who hosts a podcast, makes videos, writes, and designs & publishes games, I know full well how little time there is in each day.

So, I began my search for a way to manage my time better. An organizational tool that would allow me to keep track of my progress across multiple projects in a simple and clear fashion. I experimented with several, but ultimately I ended up with Trello. Trello is a free project management service that revolves around the concept of creating a “Board” and filling that board with columns and “Cards.” Cards can be moved around the board from column to column with a very simple drag and drop interface. In addition, cards can have descriptions, comments, checklists assigned to them, and even have files attached. You can also share your boards with other people, which is how Matt and I collaborate on projects for One Thousand XP. I found that this feature has been particularly useful in managing our game projects, and I would love to share with you how we do that here at One Thousand XP.

This is a sample of what our One Thousand XP Games board looks like.

First off, it’s worth mentioning that the basic structure of the One Thousand XP Trello boards are built on the foundation of traditional Kanban boards. You can research them yourself, but the core of the method is based on moving Kanban “cards” through three sections: To Do, Doing, and Done. I actually start most of my new boards as Three-section Kanban boards, and gradually add to them when I need a bit more granularity. Whether it’s making videos or making games, they all start from a foundation of To Do, Doing, and Done. The columns are set up in order to track the progress of each project. Here is how I’ve settled on the way I organize my gaming projects in Trello;

“The Game Idea column is for any game ideas we have, no matter how big or small.” 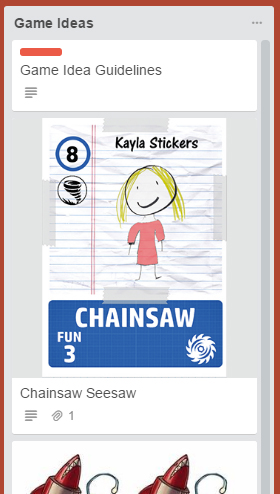 So starting from the Kanban process, our Trello games board begins on the left with an idea dump. Anytime we have an idea on a game design, we’ll throw it in the left column. This area includes everything: single mechanisms we’d like to explore, one sentence descriptions of a theme, fully fleshed out game ideas that we haven’t quite made prototypes of, and games that have gone back to the drawing board.

Every once in awhile I will go back to this column of the board and revisit some of my older ideas. Just because something is here doesn’t mean it will get worked on any time in the near future, but I feel as though it’s important to have a place for our ideas to live in the event we ever are on the hunt for a project to jump into. Some cards will live here for months, and some will only be here for a couple of hours until they’re moved to column two.

“The Playtesting column is for any games that have made it beyond the idea phase and have a prototype created for them.” 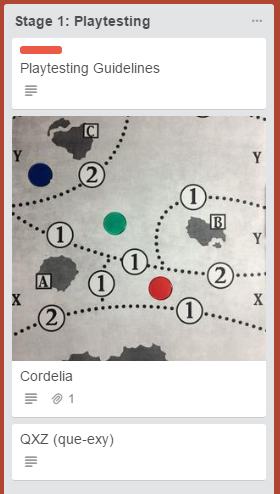 Stage one is where we begin the process of really moving our designs forward. The only barriers of entry for a game to make it here is that it must have a prototype made for it and be something that we’re actively working on. We’re pretty big proponents of getting things to the table as quickly as possible, which means that this column is really where the game design process starts for us. The first column is for game ideas, this column is for games.

While I would keep a Trello of my personal designs even if I designed alone, this column really begins to highlight the value of using something like Trello as a collaboration tool. Anytime he likes, Matt can log onto Trello and get a run down of games I have prototypes for. He can also click on a game that is listed here and see any relevant documents or files that I have shared regarding that particular game.

Over the lifespan of the average game design, it will likely spend most of it’s time on this column of the Trello board. This is where the game will live while the majority of the playtesting and design decisions are being made. If a game just isn’t working, I’ll move it back to the left in order to prioritize other projects. Always remember to make notes about what issues you’re facing when you move a game towards the left of your board. That way when you decide to work on it again you can easily pick up where you left off.

Once we reach a point where we feel the game is ready for the home stretch, we move it to the next column.

“The Fine Tuning column is for games that are nearly complete. This is the stage for blind playtests, print and plays, and final testing for balancing.” 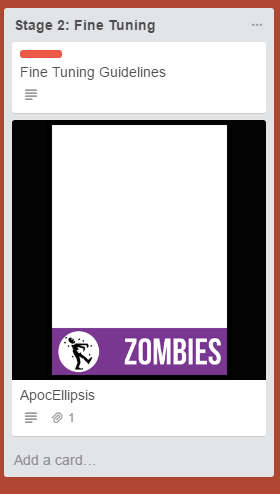 Column three is where we place games that are in the final stages of the development process. Once we feel the design is solid, we’ll move the games here so that they can be tweaked in order to make them as polished as we can. In addition, games will be placed here to indicate that they are currently undergoing specialized forms of playtests. (like blind playtests) I mentioned above that the majority of games will spend the most time in the previous column, but in many ways this column features the most difficult work. Turning an idea into a playable prototype can be time consuming, but is relatively simply. Turning a game that is “fun” but not “balanced” into a game that is both can be deceptively difficult.

As with all of our columns, games can move to the left or the right. If a game moves to the left from here it is typically a sign that something significant must be changed to the core mechanisms of the game in order for it to be finished. Once we feel as though we’ve done all we can to make the game the best it can be, we’ll move it to the 4th column.

“The Game Complete tab is for games that we feel are finished, and we have yet to release them to the public or decided on the next step for them.” 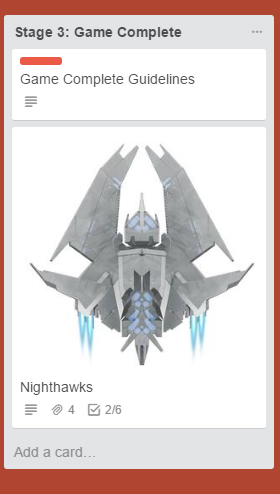 Before we get started; A GAME IS NEVER COMPLETE. I just wanted to get that out of the way, but I may go into that a bit further in a later blog.

Once the game is as good as we’re going to make it, we’ll move it here as we figure out what we want to do with it. As One Thousand XP is both a design studio and a publishing company, this means that we need to decide whether or not the games we place here should be published by us or will be pitched to other companies. As a default, when we move a game to this stage we will make a sell sheet for the game in order to prepare ourselves in the event that we do want to pitch the game to another company. For games that we do decide to pitch, this stage is the end of the line. We’ll make comments on cards in order to track the publisher’s we’ve contacted and the status of the pitches, but that’s as far as we go with that. If we do decide to self-publish, we head to the final two columns.

I won’t go into much detail regarding these columns, but figured I would mention them briefly for completeness.

ART AND MANUFACTURING: “The Art and Manufacturing column is for games that we are actively in the process of commissioning art or getting manufacturing quotes for.”

This column is where we will track correspondence with artists and manufacturers. We’ll share visual references with one another and also make sure to organize any component lists and manufacturing quotes here.

PUBLISHING QUEUE: “The Publishing Queue column is for games that are awaiting release in some form or fashion. Games in this column are 100% complete, art included.”

This is where games go when they are ready to be released. For instance, Under My Bed lived here for a bit as we were preparing the Kickstarter page and throughout the fulfillment process. I will say however, that this column is relatively gratuitous. Games that make it all the way to this section will have complete individual Trello boards created and dedicated to their release. However, it is nice to be able to glance over and see what you’ve recently accomplished.

That’s it for today’s blog. I hope our organizational structure was helpful. You should of course modify it to your needs! I didn’t go too in depth with specifically HOW to use the various aspects of Trello, as there are a plethora of resources available for those that want to familiarize themselves with the platform. That said, if you have any questions please feel free to leave them in the comments and I will answer them if I can. Also, don’t forget to subscribe to our monthly newsletter to get game design advice sent to your inbox alongside information about the things we’re making here at One Thousand XP!