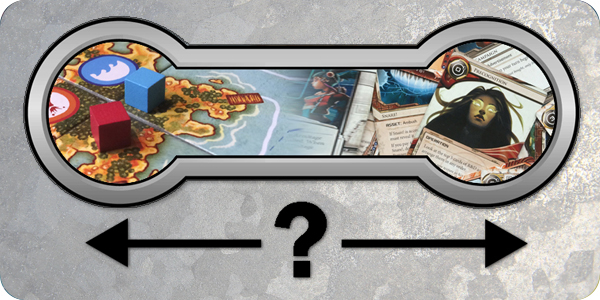 It happens to me on almost every game I design, and I find it’s one of the things that will stall my creativity more often than anything else: a fork in my design path. By fork, I mean those pivotal moments in the design of a game where I must decide which path to head towards, and ultimately what my game will be.

There isn’t always a “correct” answer, which makes the decision that much more difficult! I’ve found that if I begin looking at my game using the same criteria I would use to decide which game to play, it helps give me a bit more clarity. There are three things you can ask when you’re a bit stuck:

1) How hard do you want players to work for their fun?

The game should be fun. If you haven’t found the fun, do that first. That said, some games expect their players to be more involved with the mechanisms within the game in order to get there. Some players enjoy games which require them to calculate each decision and rewards them for getting the most out of the resources available, while some players just want to roll some dice and blow stuff up.

While randomness vs. non-randomness is certainly an aspect of this question, it does go a bit deeper than that. Think of a large team game like Codenames vs. something like Resistance. In one, you get to chill while you guess answers at your leisure. In the other you get to accuse all of your friends of being liars, rapscallions, and spies! Is the game you’re designing fun because of what the players are choosing to do, or does your game bring the fun to them?

2) What kinds of decisions do you want the players to make?

If you’re a gamer or if you’ve worked in a corporate environment, you’ve probably come across conversations about “strategic” vs. “tactical.” I’ll admit, the words make my eyes glaze over. The differences are sometimes key when you’re making changes to your game however. Some games reward long term strategy and planning, and some games reward tactically adapting to the game or the other players at the table from turn to turn.

For our upcoming game The Last Garden, this was a decision we had to make very early on. We opted to make a game which adapts and evolves constantly, and one in which players are forced to continually assess and change their plans from turn to turn. This allowed us to create a game that creates a unique experience time after time, but does so at the expense of players who would prefer to sit down, formulate their plan, and follow through with it.

3) What kind of interaction do you want in your game?

How cutthroat or social do you want the players to be? Do you want to offer them the opportunity to build their kingdom on their very own tableau like in Isle of Skye, or do you want them to jockey for position and try to cut others off like in Ticket to Ride? Perhaps you’d like to go even further, and will encourage them to conquer or crush all of their opponents in something like Blood Rage.

Most games have some form of interaction between players, it just comes down to whether or not your game game allows players to directly impact other players’ pieces or if it forces them to indirectly influence one another via other mechanics like worker placement. Beyond that, many games have inherently social interactions to balance as well. Some groups really enjoy bluffing or intrigue games and some find that type of gameplay quite stressful.

First of all, it’s worth noting that there isn’t a “right” answer to these questions. In truth, one of the coolest things about game design is that no two designers will answer them the same way, even across games which share mechanisms. These questions also aren’t binary. In fact, most games will fall somewhere within a large spectrum of these choices. To make things even more complicated, while it’s likely a person enjoys certain types of games more than others, I find that what I want to play really depends on my mood and the other people I am playing with. Because of this, each game needs to be dealt with as it’s own entity. We chose to skew more tactical with The Last Garden, but other games we’re developing reward more long term strategic play.

So while there are no hard and fast rules to determine which direction your game should take, hopefully these questions can help you make a decision and at least give you enough confidence to produce a prototype and begin testing. Ultimately that will do more to tell you what the game wants to be than anything else.

Thanks for reading! If you would like updates on the things we’re creating as well as monthly game design tips and tricks, make sure to subscribe to our email list below! -Chris