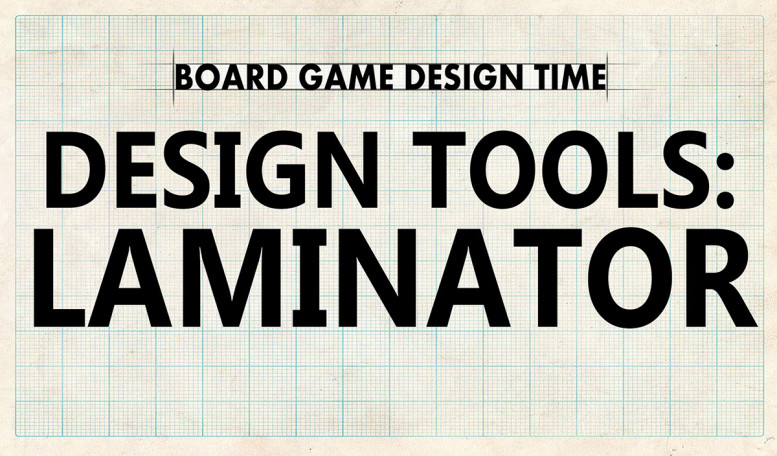 I’m always on the lookout for gadgets that help me streamline the prototyping process and I have a good one for you this week!

I was at playtest a few weeks back and my friends Daniel and Beth had laminated the cards for their game and when I inquired I was shocked to find out how cheap these bad boys really are! The one I show in this video was the “AmazonBasics Thermal Laminator

” and was a little over $20. It doesn’t come with many laminating pouches, so I bought AmazonBasics Thermal Laminating Pouches – 8.9-Inch x 11.4-Inch, Pack of 100

to go along with it for another $10. There were some cheaper laminators on Amazon, but this is the same one that they had, and $20 seemed inexpensive enough that I wasn’t going to quibble over a few bucks.

Daniel and Beth had used it for the cards in their game, and they said it was much easier and led to a better overall finished product than simply plopping some paper into a card sleeve. The cards are also a lot more durable. The downside of course is that the laminated cards aren’t easily changeable, so I wouldn’t use it if my game was in the first few stages of prototyping. I actually don’t think that I will get much use out of mine for cards, but I have been using it to create tiles, player boards, and I even laminated a page to use as a board for my most recent design “Cordelia.” It’s not something that I would recommend for every stage of the process and 80% of the time paper or card stock will work fine, but if you’re taking your games travelling or want player boards or tiles that are a bit more durable than simple card stock, you can look into picking up a laminator on the cheap.

I’m also super excited to have something that I can use to laminate character sheets for RPGs, Notecards for games like FIASCO, and scoring sheets for some of the more fiddly Euro games I have. The first thing I laminated was a Specter Ops sheet so that I had a reusable one I could mark on with a wet erase marker.

That’s it for this week, make sure to sign up down below for the One Thousand XP newsletter to receive monthly game design tips as well as info about the games we’re all working on. I’d love to share more prototyping gadgets, tips, and tricks with you!

*Links in this article are Amazon Affiliate links, so purchasing these items helps to support One Thousand XP.