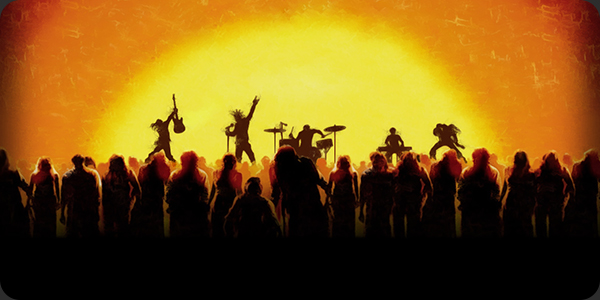 Tired of watching your friends slump in their chairs when you describe your new game’s theme?  The sullen looks across the table when you mention farms and agricultural processing via trains…with zombies.  Now, these themes do hold tried and true, but can there be something a little spicier, something with a little more pizzazz?  Of course! I am going to challenge you to get out of your comfort zone and change your game’s theme to something you or your gaming group wouldn’t normally imagine.  There are many ways you can implement new fresh themes into your game and I am going to show you three of may favorite methods:

This is the quickest way to turn your drab setting into something fresh; it’s also one of the easiest.  Try turning your run-of-the-mill fantasy or sci-fi theme into something that can be considered “real world.”  For example, imagine your average zombie apocalypse theme in which a band of survivors escape by blasting their ways through congested streets.  Ok, sounds cool…but it’s been done.  Now give it a flip, try a “real world” version.  What if instead of zombies, they were rabid music fans and instead of a band of survivors, you are a band of musicians.  In zombie games there is usually a chopper to get you out of the city, but in this version maybe it’s a limo and instead of slowing the hordes with blazing guns you are throwing autographed pictures.  This is the same premise just re-skinned without changing any of your game’s mechanics. It’s a great way to look at something from a different angle. Of course, you could also:

2) Add Something Fantastical to Your Game Theme

It’s as simple as that.  Add something crazy that would normally be out of place in an average setting.  Say your theme is railroad barons trying to link railways through gem mines.  Now add the fantastical element.  How about ghosts?  What if the mines are haunted and ghost trains are prevalent?  Imagine Ticket to Ride, but you’re trying to connect areas of the spirit world in order to get souls to their final resting places. One simple addition can add a whole new layer to the experience of your game.  It can even create some different and interesting game mechanics that you wouldn’t normally think of, which is especially useful if you’ve hit a bit of a mechanical rut.

This one can be a little bit tricky and is usually held for games set in historic or modern day settings.   Keep in mind that creating an alternate history in a game can take a little homework in the subject you are altering, and changes you make can sometimes be taken as allegorical statements on historical events and views. That said, let’s assume you’ve become a historian on the American Revolution and you want your new worker placement game set in the post-revolution colonies.  After a bit of testing, you’ve realized that the mechanics are solid, but your game feels a bit bland thematically. Well, just try to alter the history a bit.  Maybe the American Revolution failed miserably and the colonies are in disarray and under stricter British watch.  Suddenly you’ve opened up some design space to explore the “what if” of your new timeline, and those types of “what if” questions are ones that a lot of people have fun discussing. Allowing your player’s imaginations to explore the world your game takes place in can often help an otherwise plain game resonate much better.

Using these three exercises has helped me create fun and imaginative worlds and themes for the games that I’ve designed.  A game will always be the sum of all of its parts, but I’ve found that having a theme that is a bit different than what folks are used to helps my games stand out, and also helps keep me engaged with the things I’m creating! We can all think of a game out there we love but that could use a bit of a theme revamp. If you feel like sharing, I’d love to hear yours! (you can find me on Twitter) Hopefully these tips are useful for you, keep designing and I’ll see you next time!