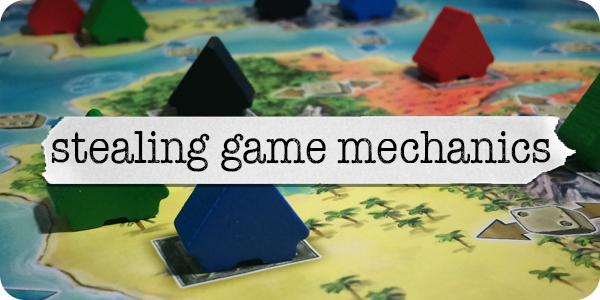 Creativity is a tricky thing.

Popular views of creative pursuits will openly laud those who “innovate” or “invent” certain styles or ways of thinking. However, creative people tend to realize that the basis of their creation, and nearly every invention man has ever made, has been the result of observation and subsequent curiosity. Naturally, we are influenced by the world around us, remixing our experiences and filtering them through the lenses of our unique perspectives.

I am here to tell you that you don’t need to create a new and unique mechanic to make a new and unique game. In fact, the mere thought of sitting down, opening a notebook, and creating something entirely unique is at best naive and at worst crippling. Innovation is fed through inspiration. Allow yourself to be inspired by the world around you, and yes, this means allow yourself to be inspired by the games you hear about, learn, and play.

Stealing the dice from Bora Bora.

In Stefan Feld’s Bora Bora, there is a fair amount of stuff going on. You are building huts around the islands, settling them, fishing, sending priests to temples to make offerings to the Gods, all while trying to gain the most prestige. It’s a game I thoroughly enjoy, and recommend you check out. However, during my first playthrough of the game there was one mechanic that stood out:

Players will roll their own die pools and take turns placing them 1 at a time on several areas of the board. The higher the number on the die, the greater the effect. However, players may only place die which are LOWER than the lowest die placed in an area. Because of this, sometimes low die are better than high die. I immediately was enamored by this mechanic. I loved it! I performed the familiar first step that takes place in nearly all of my creative pursuits, I began to wonder “what if…”

In this case, the “what if” was “What if I stripped away everything else that was here and made a game solely based on this dice placement mechanic?” I filed the mechanic away in my memory banks for a later day. About a year and a half later that day finally came.

Matt had designed a game a while back called Cordelia, but we had moved it to the background of our design queue because of other games we had been working on. Recently, we all decided to pull out some old designs and to fiddle with them just as sort of a palette cleanser from developing our newest game: The Last Garden. (coming to KS sometime this year) As part of this palette-cleaning exercise, I wanted to forego my typical design method of building a game by adding to it bit by bit. Instead, with Matt’s blessing, I decided to take a crack at Cordelia by the good old-fashioned throw everything at the wall and see what sticks approach. What do you know, out came that clever dice mechanic from Bora Bora that had been tucked away in my memory banks all this time!

I jammed all the mechanics out of my head and fused them onto paper and cardboard. I grabbed dice, I grabbed cubes, I grabbed coins. The prototype burst forth from my skull and on to the table as though it had been there since the moment that tables themselves existed. We played it, it was bad, and that was okay.

There were parts that were good, some parts that were great even. As a whole, the playtest was a success. I saw quite plainly what I needed to cut straight away, and had a strong sense about the elements I would leave in and see how they behaved in future playtests. What became immediately apparent was that the Bora Bora dice mechanic I had longed to use did not mesh quite so well with the other dice mechanic I wanted – dice drafting. A more seasoned designer would have known before trying, but at the end of the day the two were like oil and water. In fact, I can’t even tell you which one will end up being the one we use in Cordelia – but that is sort of my point.

Whether or not Cordelia ends up using the Bora Bora dice mechanic, it was undoubtedly influenced by the mechanic. It was built to embrace the mechanic but will take those influences and become something unique on its own. I could never recreate Bora Bora. Even if I set out with the expressed purpose of remaking the game, there is a good chance I would simply fail at doing so. In the same way, I could have never created this version of Cordelia without being inspired by Bora Bora.

We cannot be afraid of inspiration, in any form it takes. The minute you allow yourself to be dissuaded from exploring the “what if” of a game design question because you are worried about the “what if I am making a knock-off” question, you’ve allowed your creativity to be stifled.

Don’t allow your fear of what something may or may not become stop you before you’ve even started. Play more games, and give yourself the permission to take the elements you like and explore them. At the end of the day you may decide that your game does feel derivative or that there isn’t enough of a difference to distance itself from its inspirations. Keep it to yourself if you want. No harm done. Allow yourself to be shamelessly inspired, and the design process will find a way of working itself out.

Thanks for reading! If you would like updates on the things we’re creating as well as monthly game design tips and tricks, make sure to subscribe to our email list below! -Chris